Between my spooky shower, the 2nd smaller shower my work put on for me, yard sale finds that were brought up for me from my mom and the overwhelming generosity of people just giving me baby items they don’t need anymore, I really am feeling more prepared than I was several weeks ago!

And therefore the nursery has been coming together nicely. Baby Boo’s clothes have been organized (he officially has more than I do at this point), the crib has been assembled next to the bed (it may eventually move into the nursery) and I’ve been slowly packing up my crafty supplies (not permanently, just don’t want to be competing for space). It’s been fun to create a soothing, welcoming space for our soon-to-be-arriving little bundle! 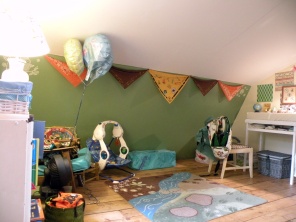 The bassinet is set up downstairs, the stroller is near the door and the car seat has been successfully installed in the Subaru. I’ve packed my bag for the hospital (as well as I can ahead of time) and stocked up on supplies from the drug-store so I don’t need to run out once my leave has started (2 weeks left!). I had my first appointment with the new family doctor, toured the daycare/early learning center that Boo will be starting at next spring and filled out paperwork for things like adding a dependent to my insurance and applying for temp disability from the state.

I do need to still buy a few things off the registry myself, including a few more diapers! Our second class at the hospital was canceled, so hopefully we can get into another one before Boo decides to arrive…but at this point I’m accepting that whatever happens, happens. There’s only so much prep that a super-planner like myself can do before I just throw the rest out to the universe!