With Baby Boo arriving any day now (if he hasn’t arrived already – I do write my blog posts in advance), I’ve been getting as prepared as is possible. But I know there’s no preparing me for the inevitable hospital bill!

As someone who’s barely had any medical intervention in her adult life, this whole pregnancy experience has been an eye-opener into how “itemized” the American health care industry is. But there’s nothing you can do about it for the most part – besides refuse certain procedures, which I’ve done to a point…but you can’t refuse giving birth! So I’m bracing myself for the big bill… 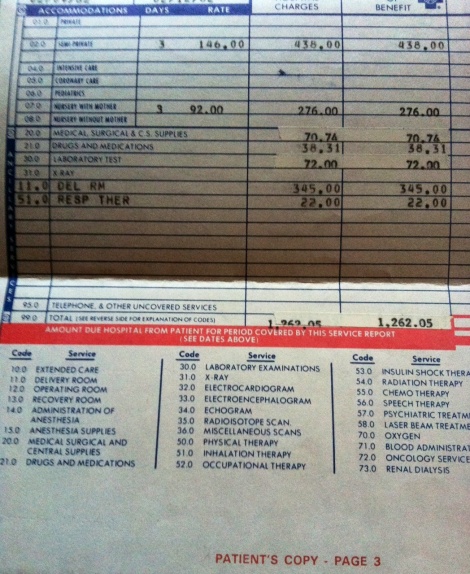 …charges for delivery have about tripled since 1996, according to an analysis done for The New York Times by Truven Health Analytics. Childbirth in the United States is uniquely expensive, and maternity and newborn care constitute the single biggest category of hospital payouts for most commercial insurers and state Medicaid programs. The cumulative costs of approximately four million annual births is well over $50 billion.

And though maternity care costs far less in other developed countries than it does in the United States, studies show that their citizens do not have less access to care or to high-tech care during pregnancy than Americans.

“It’s not primarily that we get a different bundle of services when we have a baby,” said Gerard Anderson, an economist at the Johns Hopkins School of Public Health who studies international health costs. “It’s that we pay individually for each service and pay more for the services we receive.”

Those payment incentives for providers also mean that American women with normal pregnancies tend to get more of everything, necessary or not, from blood tests to ultrasound scans, said Katy Kozhimannil, a professor at the University of Minnesota School of Public Health who studies the cost of women’s health care.

Financially, they suffer the consequences. In 2011, 62 percent of women in the United States covered by private plans that were not obtained through an employer lacked maternity coverage, like Ms. Martin. But even many women with coverage are feeling the pinch as insurers demand higher co-payments and deductibles and exclude many pregnancy-related services.

So, ho hum…I guess it just comes with the territory. But I am thankful that I at least have health insurance – I can’t imagine trying to pay $30-50k out-of-pocket, especially at a time when money is tight due to maternity leave and new baby costs. And I’m very excited to meet my little “health care expense”…who is really worth any amount of money!

Photo from the NY Times